Panning According to Craig Anderton

The idea of panning seems pretty obvious, right? You turn a panpot (real or virtual) to place a sound somewhere in the stereo field...

But ignorance of the law is no excuse – in this case, panning laws. These laws govern exactly what happens when a monaural sound moves from left to right in the stereo field, which can be different for different pieces of software. As a matter of fact, not knowing about panning laws can create some significant issues if you need to move a project from one host to another. Panning laws may even account for some of the online foolishness where people argue about one host sounding "punchier" or "wimpier" than another when they loaded the same project into different hosts. It's the same project, right? So it should sound the same, right?

Panning laws originated in the days of analog mixers. If there was a linear gain increase in one channel and a linear gain decrease in the other channel to change the stereo position, at the center position the sum of the two channels sounded louder than if the signal was panned full left or full right.

To compensate for this, it became common to use a logarithmic gain change response to drop the signal by -3dB RMS at the center. You could do this by using dual pots for panning with log/antilog tapers, but as those could be hard to find, you could do pretty much the same thing by adding tapering resistors to standard linear potentiometers. Thus, even though signals were being added together from the left and right channels, the apparent level was the same when centered because they had equal power.

But this "law" was not a standard. Some engineers preferred to drop the center level a bit more, either because they liked the signal to seem louder as it moved out of the main center zone, or because signals that "clumped up" around the center tended to "monoize" the signal. So, dropping their levels a little further created more of an illusion of stereo. And some of the people using analog consoles had their own little secret tweaks to change the panning characteristics.

With virtual mixers we don't have to worry about dual ganged panpots, and can create any panning characteristic we want. That's a good thing, because it allows a high degree of flexibility. But it also adds a degree of chaos that we really didn't need.

For example, Cubase SX3 has four panning laws in the Project Setup dialog; you get there by going Project > Project Setup.

The default pan law for Cubase is to drop the center by –3dB, which is the classic equal power setting.

Setting the value to 0dB eliminates constant-power panning, and gives the old school, center-channel-louder effect. Since we tried so hard to get away from that, it's not surprising that Cubase defaults to using the "drop the center by -3dB" classic equal power setting. But you can also choose to drop the center by -4.5dB or -6dB if you want to hype up the extremes somewhat, and make the center a bit more demure. Fair enough; it's nice to have options. 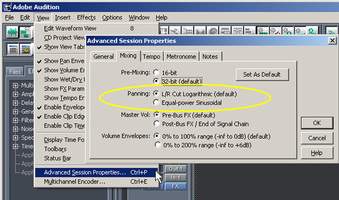 L/R Cut Logarithmic is the default, and pans to the left by reducing the right channel volume, and conversely, pans to the right by reducing the left channel volume. As the panning gets closer to hard left or right, the channel being panned to doesn't increase past what its volume would be when centered. The Equal Power Sinusoidal option maintains constant power by amplifying hard pans to left or right by +3dB, which is conceptually similar to dropping the two channels by -3dB when the signal is centered.

Sonar takes the whole process further with six different panning options, which you can find by going Options > Audio. 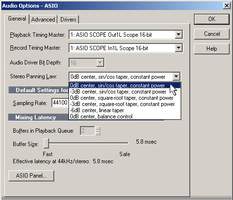 In the descriptions below, "taper" refers to the curve of the gain and doesn't have too radical an effect on the sound. The six options are:

You can actually see the results of choosing different pan options. 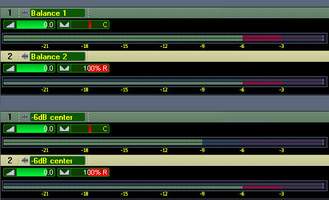 This screen shot shows meter readings in Sonar for two different pan law settings. (Note that pan law is a global setting, and can't be set individually for each track; this illustration was created by taking two screen shots and combining them.)

So Which is the Best Law to Choose?

As laws go, this particular one is pretty unspecific. In fact, if you compare the three programs mentioned above, they all default to a different law!

This can become a real problem when you move a project from one host sequencer to another – unless the selected panning laws match, look out. I often wonder if when some people say a particular host sounds "punchier" than another, the "punchy" one boosts the level when signals are panned hard left or right, while the "unpunchy" one uses the law that drops the level of the center instead.

For example, suppose you move a Sonar project to Cubase SX. It's going to sound softer, because Cubase drops the center channel to compensate, while Sonar raises the left and right channels to compensate. Conversely, if you move a Cubase SX project to Sonar, you might have to deal with distortion issues because signals panned hard left and hard right will now be louder.

But where these laws really come into play is with surround, because here you're talking about spatial changes among more than just two speakers. Bottom line: Be consistent in the panning law you use, and document it with the file if a project needs to be moved from one platform to another.

Personally, I go for the tried-and-true "-3dB down in the center" option. I designed analog mixers to have that response, and so I'm more than happy to continue the tradition within the various sequencer hosts. Also, this is one option that just about every host provides, whereas some of the more esoteric ones may not be supported by other hosts.

We can't sign off without mentioning one more thing: The pan law you choose isn't just a matter of convenience or compatibility, although I've stressed the importance of being compatible if you want to move a project from one host to another. The law you choose can make a difference in the overall sound of a mix.

This is less of an issue if you use mostly stereo tracks, as panning in that case is really more of a balance control. But for many of us, "multitrack" still means recording at least some mono tracks. I tend to record a mono source (voice, guitar, bass) in mono, unless it's important to capture the room ambience – and even then, I'm more likely to capture the main sound in mono, and use a stereo pair of room mics (or stereo processing) that go to their own tracks. And if you pan that mono track, you're going to have to deal with the panning laws.

In any event, you now know enough about those laws to make sure you don't get cited for contempt of court. Happy panning!

Log in
Become a member
Viewers of this article also read...
learning Using Delay to Broaden Your Horizons
learning 11 Studio Errors to Avoid
learning The final export of your mix
learning All About Dithering
learning Mixing your drums Part 1 : the kick
learning An interview with legendary producer/engineer Ed Cherney
learning A Matter of Perspective
learning More About Compressing Reverb
learning How to use tape machine and mixing console emulators
Voir tous les dossiers