Similarly to the hi-hats, chances are the overhead stereo tracks are more than enough to correctly reproduce the sound of the tons, unless of course they play a relevant role in the song you're working on. In that case, it could be interesting to place a mic on every tom. It's important to note, once again, that the body of the sound of the toms will come from the overheads. What we'll try to achieve today is to focus on the attack, to gain more precision to allow a better localization of the toms in the soundscape. 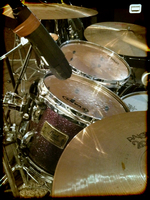 For our recording session we used Sennheiser MD 421 dynamic microphones with cardioid polar pattern on each tom. The MD 421 is a classic mic to close mike toms, but it can be easily replaced with the Shure SM57, the all-purpose mic par excellence with an extraordinary value for money, as you have probably come to realize if you've been following this series. The Sennheiser e604 is yet another alternative, since it has the advantage of featuring a clip that allows you to fix it directly onto the drum, sparing you a couple of mic stands.

When it comes to placing the mics, there are no mysteries. In fact, you have to do more or less the same as for the Snare Top mic. A good starting point would be to place the mic at a 45º angle from the drumhead, 2 to 4 inches above the drum, with the capsule aiming at a point somewhere between the center of the drumhead and the rim. You can play with this position to find the right balance between attack (closer to or aiming more directly towards the point of impact) and fullness (farther away and/or avoiding the center of the drumhead).

Here are the results we got with the MD 421:

Granted, there's quite a lot of bleed form other elements, but that's not surprising at all. The attack, which was what we were aiming for, is clearly there. With a bit of work at the mixing stage, it shouldn't be hard to get the desired effect.

To finish, here are a couple of remarks regarding the close-miking of toms. 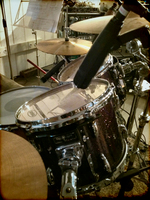 First of all, you've probably realized that we only used dynamic mics with cardioid polar pattern. Why? Well, on the one hand they are less sensitive than other mics, which limits the level of bleed and, on the other, dynamic mics can handle high SPLs without a sweat, which is no minor issue when it comes to recording toms. That said, if your drummer is more "jazzy", large diaphragm condenser mics, like the AKG 414, will allow you to capture better all the nuances of his/her playing.

Second, do mind the resonances inherent to the toms. It can be a true nightmare to work with them during mixdown. So, what should you do? Deal with it during tracking, to the greatest extent possible. Personally, I use Moongel, a very effective tool I have already told you about when discussing the snare. But there are lots of other home-made alternatives with the use of gaffer tape and/or cloth. Ask the drummer about it, he probably knows best about this sort of practices. But be careful not to overdo it or you will muffle the tom too much. 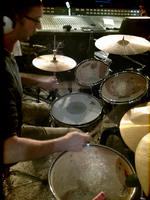 Finally, do note that some audio engineers use the same configuration but with additional mics right above the toms, with the idea of achieving something similar to the Snare Bottom mic we discussed when talking about the snare. The goal is to get a tom sound that is fuller. Personally, I'm not such a big fan of using a huge arsenal of microphones. As I said before, the more mics, the more likely there will be phase issues. What's more, every time I've received drum recordings including this kind of track I waste lots of time trying to do something with them to only end up throwing them in the garbage can. But maybe it's just me who doesn't know how to use them... Anyway, I don't like this technique and, hence, am not the right person to comment on it. Si, if anyone out there can explain to the rest of us the secrets behind this method, the rest of us will be very grateful!

See you next time to discuss the Stereo Room track.