Slapback and Doubling with Delay

This time around, we'll look at two "classic" uses of the delay effect.

This is without a doubt one of the oldest tricks in the delay book. And it couldn't be easier to apply. You only need to set a delay time somewhere between 70ms and 110ms and with no feedback. This results in a single repetition that is clearly distinguishable and could be interpreted as an echo very close to the source signal. But be careful, in order not to interfere too much with the instrument you are applying it to, you will inevitably need to EQ the delayed sound to trim some of the highs and lows.

The Slapback effect has been very popular since the '60s although it seems to be less and less used nowadays. But it can nevertheless be used on certain modern productions to give them a nice "oldies" touch. While it is mainly used on vocals and guitar, you shouldn't shy from experimenting with percussion instruments, such as the snare or the hi-hats, which might result in interesting "accidents."

Another typical use of the delay is doubling, which as the name implies means using it to simulate more or less realistically the layering of two different takes of the same instrument. Once again the feedback parameter must be set to zero, but the delay time ought to be shorter, somewhere between 20ms and 70ms. Be careful not to set it too short or you risk having important comb filtering issues, which will only complicate your mix. And again, you will have to EQ the delayed signal. 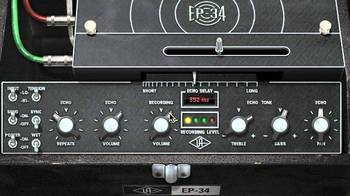 And the basic settings I suggested above aren't enough to create something realistic. There are different options to tackle the issue.

You can start by giving more sweep to the doubling while at the same time keeping the original signal intelligible by using a stereo delay that offers the possibility to set slightly different delay times for the left and right channels.

Then you can try to slightly detune the two delay lines, with different values obviously.
Finally, the cherry on the cake would be to modify just slightly the delay time of each of the lines in order to get a constant pitch fluctuation. Lennon anyone?

A couple of remarks before closing this article. First, whenever you use any of the above techniques, always check the mono compatibility of the mix, because you might end up with ugly surprises. Second, these effects have been historically achieved using tape delays. So, if you have one such plug-in among your arsenal, it might be wise to use it here. The outcome will be more realistic in an "audio culture" sense, if you know what I mean.

Next time we'll look at more specific uses of delay during mixdown.