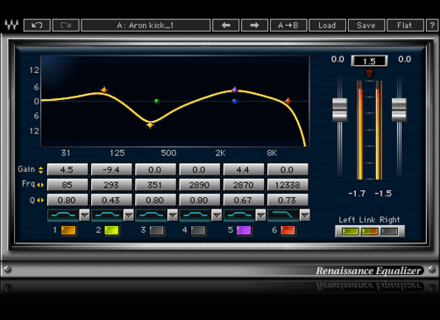 Buy this productView price information >
View other reviews for this product:
The process of installing the Waves Ltd. Renaissance EQ plug-in on my computer wasn’t hard at all and took a very short while.  I didn’t have any compatibility issues or other problems really and the whole process was pain free.  After installing it I found that it didn’t take me too long to figure out how to use everything in this plug-in as the interface is put together nicely and is easy to follow.  The plug-in contains a six band EQ that each has changeable parameters for gain, frequency, and Q.  There is also the option for each to make it a shelf EQ or otherwise.  There is also an overall output level slider and a graph showing exactly the changes that you are making.  Like all Waves plug-ins you can save presets as well as A-B them to compare sound.  I haven’t needed a manual for this software so I can’t speak to if it would be helpful or not.

I’ve never had any problems running as many of the Waves Ltd. Renaissance EQs at a time as I’d like.  If I can recall correctly I’ve probably had at least six or seven of these up in a single session without any problems.  While it depends on what machine you are using, I am running it on a Mac Book Pro that has a 2.2 Ghz Intel Core 2 Duo processor and 4 GB of RAM, to give you an idea of a system that it will definitely run well on.  I use the plug-in in Pro Tools LE 7.4 primarily that runs off of a Digi 002R audio interface, but also have experience using it in Pro Tools HD.  While I can run it quicker on the HD system, this is to be expected always and isn’t to say that it doesn’t run well on the LE system because I’ve never had a problem doing so.

I’ve been using the Waves Ltd. Renaissance EQ for about two or three years now and while it isn’t my favorite EQ plug-in out there, it sounds good and gets the job done easily and without problems.  It is pretty similar in make up to the Digidesign EQs, both of which are quite easy to use and to me the Renaissance EQ has a cleaner sound.  This plug-in isn’t all that cheap as is the case with all Waves plug-ins, but if you get it in the Renaissance bundle you’ll be able to get a pretty good price per plug-in and will get some other powerful plug-ins to throw in the mix as well.  All in all, I love using the Waves Ltd. Renaissance EQ because it is extremely easy to use and will work on just about anything.
Did you find this review helpful?yesno
Cookies help us improve performance, enhance user experience and deliver our services. By using our services, you agree to our use of cookies. Find out more.